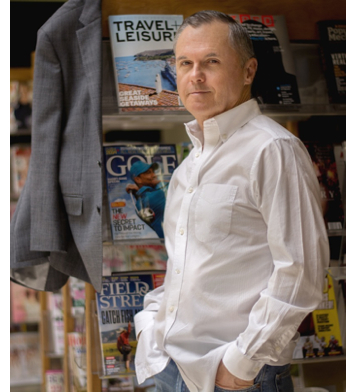 Morgan was my mother’s maiden name. Our work honors the collective spirit of my family and how I came to be who I am. My father was an Air Force officer. I inherited the hairstyle, a commitment to service and a sense of humor. I was born in Long Beach, California and grew up in Oklahoma where I learned the value of hard work and the satisfaction of helping others. My father and mother were extraordinary characters whose parents came to the heartland as pioneers with the purpose of creating a better life.

As someone who chose creativity as my life’s work, I acknowledge many mentors: my family and teachers, friends and business associates and my son. Early on I learned valuable lessons from Scouting, the love of sports and ultimately golf, the business in which I worked during high school and college. Through the years I’ve enjoyed the privilege of representing many innovative companies, large and small, and individual artists, helping tell their stories and manifesting their vision into the reality of success.

We look forward to discussing the possibilities for your business or career.

Author of Angel City Singles (2018), Don’t Be Shy (2015), Claim to Fame (2015), and Will of Golf: Mastering the Mind-Body Connection (2001). An award-winning poet, Cissne’s short story publications include American Way and Playboy.

Editor and publisher of books by Frank Natale including Results: The Willingness to Create (2015), Natale Trance Dance (2014), The Wisdom of Midlife (2012), and Relationships for Life by Frank Natale (2011). Editor and consultant for The Yapana Way by Leeann Carey (2013).

B.A. Journalism, The University of Oklahoma